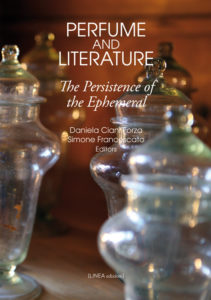 How can you describe a perfume? How can you put into words a presence that is fleeting but intense, embodied in an evanescent fragrance?
This volume analyses the relations between writing and olfactive sensations as eloquent signs of world cultures, of the diverse sensitivity with which we each interpret its nuances. As regards their style, content, and approach to the subject, the essays in this collection offer a kaleidoscopic overview of a ‘literary-olfactive’ universe that ranges from Antiquity, Renaissance culture, Symbolism, and the fin de siècle Decadent Movement up to postmodern world-shaking literary phenomena.
The aim of this collection is to enrich the extensive bibliography on the precious art of perfumery or the history of essences and perfumes, with studies expanded in an original way to the literary field.

Daniela Ciani Forza is associate professor of Anglo-American Language and Literature at Ca’ Foscari University, Venice. She is a member of the scientific boards for various journals and international studies series; she co-edits the series “Soglie americane,” “Nuove prospettive americane,” “Culture a confront,” “Incontri” and “Le Tre Venezie: Turismo e Letteratura.” She has carried out studies and research on modernist and contemporary poetry, on Puritan rhetoric and on diasporic literature in English in the United States. She is currently a member of the board of directors of the Italian Association of North-American Studies (AISNA). Her most recent publications include: America Periferica. Letteratura Cubano-Americana (2003); Quale America? Soglie e culture di un continente (2007); Sguardi obliqui: migrazioni tra identità americane (2012).

Simone Francescato is associate professor of Anglo-American Language and Literature at Ca’ Foscari University, Venice. His areas of study are American literature in the nineteenth and early twentieth century (Realism, Naturalism, Aestheticism, the Decadent Movement, and their European models). His publications include the essay “Il decadentismo americano” (2009), the monograph Collecting and Appreciating: Henry James and the Transformation of Aesthetics in the Age of Consumption (2010) and the critical edition of the novel Rosalba: The Story of Her Development by Grant Allen (2012). He is currently co-editing with Rosella Mamoli Zorzi volume XVII of The Cambridge Edition of the Complete Fiction of Henry James (The Aspern Papers and Other Tales).